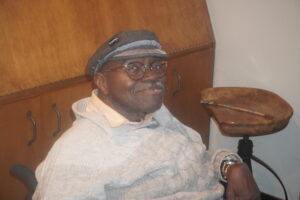 Robert Lee Harris, Co-Founder, is a widower and parent of a 40-year-old son. Robert is a world renowned artist, activist, and crusader of those with disabilities. He contracted meningitis at the early age of 8 months resulting in permanent paralysis of both legs and his left arm and hand, he uses a wheelchair for mobility. An accomplished artist of over 40 years, he describes himself as an “artist for social change”.

Robert helped lead the fight for the passage of the ADA, both locally and nationally, has served on numerous boards representing the challenged community including being co-chair of SORTA (Southwestern Ohio Regional Transit Authority), has served as an accessibility advisor for many local projects including the Cincinnati Natural History Museum and for the Cincinnati Reds. He has been recognized nationally, in Columbus, and locally as an advocate for the disabled.

In 1989 Robert received the Victory Award for the State of Ohio and was honored at the White House with a “tea” with First Lady Barbara Bush. In 1991 he was guest the guest of the Art Council of Great Britain and served as co-chair of the Ohio Arts Council’s Artists with Disabilities committee. In January 1994 he received the Ohio Humanitarian Award from Governor George Voinovich. In 2013 Robert was inducted into the Ohio Civil Rights Hall of Fame. 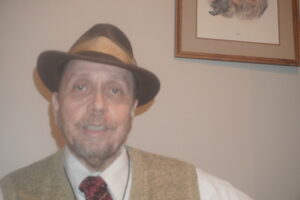 Juan Miller, Co-Founder and Executive Producer, is a native of, and presently resides in Cincinnati, Ohio. Juan has fought a 48-year battle with mental illness, namely by-polar disorder, a 37-year battle with epilepsy, and a lifetime of conflict being a biracial man in a black and white world. It is from these contests, and his own life experience, that Juan draws not only his perspective on and towards life, but also his perception of the arts as well.

In 1974 Juan began his artistic career as an apprentice in the scene shop of the Cincinnati Playhouse in the Park, and audited college courses for high school credit. His first two years in college he majored in scenic design at Pittsburgh’s Carnegie Mellon University, and the College Conservatory of Music at the University of Cincinnati. It was after his second year of college, and a season as the scenic designer at Chicago’s Kuumba Workshop, that his mental illness would catch up with him.

For 10 years Juan lay unproductive at the mercy of his mental illness. Only to be rescued by a vibrant African American community theatre movement in Cincinnati: spending the next 5 years designing and building sets, hanging lights, and running shows. Juan then spent 6 years as a public access television producer; attending Xavier University as an electronic media major. In 1997 Juan began writing, mainly as a playwright and poet. Having had one play read at the Aronoff Center for the Arts in Cincinnati, OH.  In 2010 Juan returned to school at the Union Institute & University, receiving his Bachelor’s Degree of Arts in filmmaking in 2013.

Juan is passionate about inclusion of the challenged community and those marginalized by race, gender, or identity into everyday society, he currently channels his creative talent through his being Executive Producer of Vulcan’s Forge and his playwriting. He has two grown children, Eileen, and Ash who identifies as a transman.